Evolution of this Site 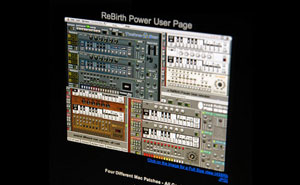 I know nothing about web design or development, so I like to keep things as simple as possible. The images below are little reminders of how this site has changed over the years.

I think I keep these images around as a reminder of how things have changed on this site, and as notes of previous mistakes. Until recently, content from my old sites was still available, but that data has been removed.

Back in 1997, when we first made the ReBirth Patches to modify RB338 v1.0, I put up a little page using Netscape Communicator. Like any web nubie, i thought Black would be a cool background color. The only image on the site was a screenshot of the first four graphics mods. 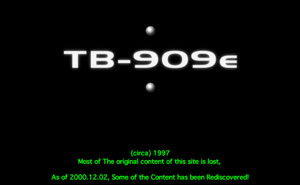 Not long after I launched the first Power User webpage, Propellerheads introduced ReBirth version 1.5. I revamped the site to serve up the patches, links, and some of my early ReBirth tracks.

The “TB-909e” logo was the same font as the “RB-338″ used by Propellerhead Software, but i stretched it out a bit. Eventually this evolved into the “Technobox TB-909e” website. I even managed to get a crude AOL forum running on that site which was black with florescent green text with an ASCII terminal look.

After ReBirth 2.0 was introduced in 1998, everything changed, and I went with a green motif that still lingers in the current verison of this site. That’s about the time i adopted the “P” logo which is based on the Roland “R” logo. This was my little homage to the originators of the TB-303 and TR-808/TR-909 devices.

Around that time I managed to get the Peff.com domain name, and then I developed the “Peff” logo based on the font used by Roland. Just before Reason was introduced in 2000, I changed the look again but maintained the green-ish color theme. Perhaps it has something to do with the way the color appears to my eyes-green has always been my favorite color. 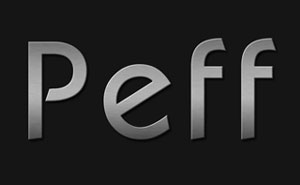 The “P” logo changed from the parallel lines to a solid “P” that isn’t quite as elongated. This new also based on the lettering of the Roland TB-303. I traced out the P from the “B” in the word “Bass Line” from a scan of the TB-303 manual. Perhaps subconsciously I keep using elements inspired by Roland–my first synthesizer was Roland Juno-106.

Roland corp has been essential to evolution of electronic music, and this site would not exist without their products and technology. Even the font used in this logo is a close approximation to the typeset used for the “Computer Controlled” label on the TB-303 and TR-808.