There are certainly more people at NAMM on this year than the previous years. This probably explains why I had such a hard time securing a hotel room. The first couple of days have seen fairly large crowds, making it really difficult to leisurely go around to the different booths. My first real day the show started with a little visit over to FXpansionto see GURU. I haven’t really had the chance to check out this little drum machine plug, but it has some really nice features. It has the basic sample based triggers, but it also functions a bit like recycle in that you can extract slices and grooves and assign them to pads.

I managed to catch a bit of the Cakewalk Dimension Pro and Rapture demo’s presented by Mike Prager. Everyone knows that I’m a mac guy, so I rarely pay attention to most of cakewalk’s products…until now. These plugs are now mac compatible! Rapture is really cool. It’s a wavetable synth with the ultimate in Ring Mod routing possibilities…and well… I’m a sucker for a ring modulator.

Ableton is positioned right next to the Cakewalk booth (right where the props were previously), and my friend/editor of my book, Jim Aiken, was presenting a demo on using macros with Live 5. Jim had some really cool techniques for setting up tweaky effects in Live…and he even put on a bit of show with his dance moves… don’t let the scholarly appearance fool you

Anyone doing electronic music struggles with acoustic instrument samples, but I’ve been amazed at the complexity of the new sample systems on display at this show. One of these was the “Real Guitar” plugin from Music Lab. The strumming, plucking, muting, and various timbral artifacts are nicely captured and mapped to the keyboard in a way that allows you to using a MIDI keyboard to input a fret and strum combination.

Another interesting system was the Vienna InstrumentsLibrary and performance interface system. The demonstration was a solo violin sample instrument that (in the noisy conditions of the exhibit hall) seemed very expressive. The performance interface measures the time between notes and selects a different sample group depending on the duration.

On the other end of the sonic spectrum there was Metasonix’s new S-1000 Wretch Machine! Eric has created a Vacuum Tube based synthesizer that features his multimode filter and the waveshaper with patch points and CV control… perfect for the analoghead… yeah, i want one too!

So if you’re a fan of the old keyboard plug-ins and samples, then Korg has provided the obvious next choice to complement your FM7 and D-50 samples: The M1 le plug-in. Back in the day that’s what everyone had (present company included). I don’t know… I guess it would be handy if you’re doing some retro house tracks and really needed that M1 piano sound, or that organ bass… like i said… I don’t know…

On the other hand, Korg has introduced another cool control surface called the padKONTROL, and it has some MPC-like features including the “Roll” button and a TR like “Flam” button. It functions like the keypads on the K49, but also includes a XY touchpad for KAOSS type of control. This surface along with Reason might make me sell the old MPC… but probably not. 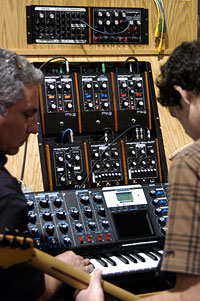 Moog Music’s complete ensemble of pedals including the the Bass MuRF and the new delay pedal.

GW playing a new track for Jimmy who might do a remix. Everyone got into sharing some tunes off their iPods

GW playing with the Access TI. It’s a nice keyboard with a great feel…I went through the set of patches, and the sound set is really geared towards a certain central and northern european genre of electronic music. :-p

And here’s my long answer: Forget the booty…This is far more interesting! The Euphonix MC Media Application Controller. It’s an amazing control surface for Nuendo, Pro Tools, Logic, etc, and integrates a keyboard along with a touch screen and 56 programmable soft buttons. The soft buttons are really cool-Each button has a little LCD display so the icons and button name are changed by software. There are also four motorized faders and eight rotary encoders…now i need to get the props to develop remote drivers for this baby!

At the end of the day, Tage gives his thanks to the crew before we head out for Dinner. We went out to some steak house type of establishment before returning to Hilton party thing. I’m getting too old for that “scene” with drunk rockers. So I called it a night pretty early — this explains how i managed to get this entry finished this morning.