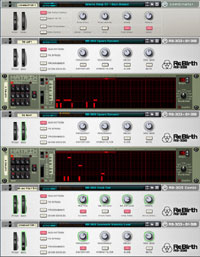 For those of you who downloaded the 50meg version of the RB-303 refill. Time to delete it! It’s being decomissioned for the new slimmed down 11meg version 2. All of the samples have been looped for unlimited sustain and thus shortened. It’s taken a year to finally get this far, and it’s still not finished…It’s very close, but my friend Hami has offered to create some cool combi skins which will be applied to the final version.

Because of the smaller samples, I’ve been able to create a new set of Combinator patches which have velocity switching layers for normal and accented notes to better simulate the dynamics of the 303 sound. Ideally you will be connecting a Matrix Pattern Sequencer to drive these combis, and the default gate level will trigger a “normal” note. Increasing the gate value to maximum will trigger an “Accent” note. There is an example song file called “Accent Demo.rns” which demonstrates this setup.

The Slide feature still does not work in the same manner as ReBirth or a 303, so as a workaround, there is an extra set of samples with moderate portamento settings. The combi simply switches between the legato set and the retrig set of samples. It’s overkill, but this was the only solution i could devise with the NN-XT.

Like the previous version, you will need the RB-338 Refill with some of the demo song files. This is still available from the Props Website.

The RB-303 combis are based on the Bass Filter patches, released here several months ago which added filtering and specialized equalization that attempts to emulate the roland 18dB filters. Its a chains of effects that relies on the 6dB filter of the NN-XT in conjunction with an ECF-42 and a MClass Equalizer. It’s by far from a perfect copy, but it’s functional and provides a 303-ish experience.

There are now twelve different combinator patches provided in the ReFill. The original for are still there and will function with tracks you’ve created with the earlier version.

RB-303.cmb loads both the sawtooth and squarewave samples, and allows the user to switch between the two by toggling combi button 4.

RB-303 Sawtooth.cmb and RB-303 Square.cmb simply load one set of the samples.

RB-303 Sawtooth & Square.cmb loads both sets and plays both sets of samples simultaneously for a thick layered sound.

Dynamic patches have the accent feature described above. The four base patches are duplicated with this feature, and there’s an extra RB-303 Dynamic2.cmb with slight parameter tweaks.

RB-303 Stack Pad.cmb uses the RB-303 samples to create lush polysynth textures. Four sets of the samples are layered with some effect options.

RB-303 Sawtooth Velocity Lead.cmb is a basic monophonic sawtooth lead patch transposed for keyboard play rather than being driven from a Matrix Pattern Sequencer. It has the same parameter controls as the RB-303+Bf-318 patches, but the mod wheel controls a warbling LFO modulation like a typical lead patch. The velocity scaling is also better suited for keyboard play, and does not have the accent features.

RESONANCE Knob controls the filter resonance on the NN-XT and the ECF-42. This control also modulates the EQ shape.

DECAY Rotary modulates the decay and release stages of the envelopes on the samplers as well as the secondary filter.

ENV.MOD Control increases the modulation intensity of the ECF-42 only.

HYBRID FILTER Switch toggles between the 18dB Low Pass configuration and a hybrid of the NN-XT 6dB lowpass and the ECF-42 12db Band Pass filter.

SLIDE Enables the portamento feature on the NN-XT samplers nested in the combinator patch.

This one came out surprisingly cool. The mysterious S+S combi in the previous version evolved into this patch. There are four NN-XT samplers that layer RB Sawtooth, RB Square, Square Sub (just the square transposed down), and a Sawtooth transposed up a 5th. It might be a bit overkill, but this patch is capable of creating some very cool polysynth textures as well as nice velvety pads.

5TH SAW LEVEL Knob adjust the mix level of the Sawtooth samples transposed up a 5th.

EQ ENABLE Button inserts a MClass EQ which adds a touch of bass tilt to the patch.

UNISON ENABLE Button adds a UN-16 into the effect chain. Goes from a synthetic analog sound to really really synthetic.

COMP ENABLE Button engages a COMP-01 compressor. The output from four layers of NN-XT samples can get pretty loud when playing polyphonic parts. The compressor works to stablize the output levels.

MOD Wheel adjusts the filter resonance on the NN-XT samplers. There is a slight envelope modulation on the filters which is noticeable when the resonance is increased.

This combinator patch requires users to show devices and select a Matrix Pattern that triggers the ECF-42 envelope. Many of the Original ReBirth PCF Patterns are transcribed based on the pattern illustrations in the ReBirth manual. Other patterns, especially in Bank D, are original.

AMOUNT Control adjusts the modulation intensity of the Env.AMT and Vel. parameters on the ECF-42.

A year after the ReBirth Museum was launched, most of us are still pining for the ReBirth sound in Reason. I usually tell people to get the AudioRealism 303 plugin, but I’ve recently met a few people who are busy building x0xb0xes (which btw look really cool). Until an actual rebirth of rebirth, i guess this will have to do. Like i mentioned in the beginning - THIS IS NOT THE FINAL VERSION! but you can download it anyways: