Despite arriving early to NAMM this year, I’m a little late getting to the report, but that’s ok, since I think everyone has already hear the big news from the Propellerheads and the announcement of a new synthesizer aptly named “Thor”. Right around 10:30am on Thursday morning, James Bernard went into a demonstration of the new Polysonic Synthesizer. If you thought Reason’s synths already sounded pretty phat, then the sound from Thor can be considered “morbidly obese”. 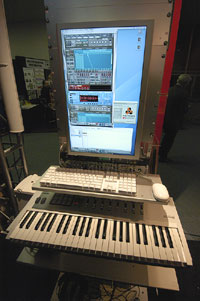 One of the more impressive changes to the display was the rotation of the monitors at the Propellerhead Software booth. The demo machines were switched to portrait mode so that you could get a huge rack on the screen.

The main focus of the Props display this year was a demonstration of talent and making music and having a good time with Reason. Every day at 5pm, things would wind down and laptops would make there way to the booth where a little impromptu jam session took place. James, Tage and Steffan put together some cool mixes on the fly - no sync.

Every artist presentation drew massive crowds as the esteemed guests demonstrated their secret techniques with Reason. DJ Babu had a really interesting demo of using Recycle to cut up samples for retriggering in Reason.

Mocean Worker getting ready to demonstrate how to whip up a kosher Elvis remix in his Manischewitz Matzo Shirt.

Jeremy Ellis is a new addition to the props roster. James discovered this pad virtuoso at the DEMF, and set him up with a Reason alternative to his MPC. There will be video of Jeremy’s performance, and you will be stunned by his skill with the pads. He put on one of the most exciting demos i’ve ever seen with Reason. 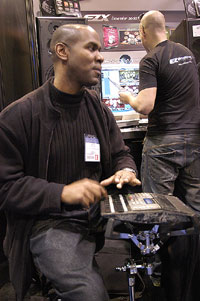 So if you’ve seen that clip on youtube of Alvin Mills and some unknown guy playing jazz drums off an Alesis HR-16, then this picture will look familiar. This is drummer and drum machine virtuoso, David Haynes. He was brought in by EastWest to demo EZ Drummer. Watching guys like David and Jeremy makes you realize that talent is now cultivating around technology.

EastWest also had their new “Fab Four” plug-in on show which featured a sample set produced by Beatle’s Engineer Ken Scott. This plug-in touts a 64bit sample engine and features a variety of instruments from the Beatles Era which were recorded through a signal path similar to the original Beatles Recordings. What the material doesn’t explain is that they called upon John Hinson of Revolution Recording Equipment to build REDD.47 mic pres and modify an Altec compressor to the EMI RS-124 specs for this project

My friends, the Merkle Brothers of Bitplant, are now officially established as probably the best Music Software GUI designers in the business. They even worked on one of the new EastWest plug-ins, and this year they have stretched their talents to developing booth displays for Camel Audio. Some the other projects include the new plug-ins from Wave Arts.

When bitplant first formed, I was hired for some whopping megabucks as an employee (inside joke). I got my Christmas bonus in the form of a T-Shirt.

Bitplant has also worked on another very special project called Addictive Drums from XLN Audio. I had actually seen the beta version of this when I was in Stockholm last year visiting Sonic Charge/Mr. Malstrom: Magnus Lindstrom. This is definitely one of the coolest drum plug-ins that you would not have seen at NAMM. It’s a multi-channel sampled drum system, but the MIDI and groove implementation is really unique in that you can drag and drop sequence files to quickly structure a drum groove, then mix it to your tastes. Lars and Niklas of XLN Audio were busy walking the floor, but sadly didn’t have a booth to show this great new product.

Sporting the new Bitplant T-shirt, I was forced to go out and pose with some booth babes. I was tempted to crack a line about Graphic User Interfaces, but they certainly didn’t need any upgrades. They were quite funny though, bossing around the Merkles on what angles to shoot and insisting on using flash. The girl on my right said, “Listen to us. We’re professionals! It’s better with Flash!” - she could be a spokesperson for Adobe/Macromedia.

Our friends at Arturia had some exciting new products on display. They were introducing their new Hardware - uh yes, i said it, hardware synth called the Origin. It’s basically a stand alone unit that runs a combination of their softsynths along with sequencer and effects. The array of controls allows for some wild modulation routings to create some mega patches.

Arturia also had a Jupiter 8 emulator that had that classic 80s analog sound. It looks and sounds great. They had this really cool jazz player demoing the sound throughout the show playing some old progressive style synth keyboard stuff. It was impressive at first, but after several days it became a bit much to listen to. It couldn’t be avoided since the Arturia booth faced directly at the Props booth. It was interesting to hear Jupiter go up against Thor

Clavia had their new C1 Combo Organ on display which had some cool features including an 11 pin output to plug into your leslie, along with a brake switch. So you don’t have to haul around a 300lbs B3, but you can still drag around at Leslie 110.

Along a similar vein, but ultimately much cooler was the reintroduction of the Rhodes Electric Piano. No this is not a virtual or sampled based device, this is the real deal! The Rhodes Music Corporation introduced the new Mark 7 Electric Piano line, complete with hammers, tines, springs, and pickups…. oh and MIDI (out).

The 61 Key Stage version with the cool retro styling in Red. 88key, 73key, and 61key models are offered along with amplification systems and all of the classic Rhodes features that make the unique tone. The action is more like the later model keyboards so it can be played faster and easier than the early models. The Rhodes is Back!

C Thru Music introduced a very unique MIDI control surfaced called the Axis-64. It’s based on a circle of 5ths layout in a honeycomb pattern where you can quickly generate chords by pressing a combination of contiguous buttons. It seemed odd at first, but after a few minutes I was coming up with some interesting chord progressions and harmonies. The buttons are velocity sensitive and scalable.

My friends from Loopmasters were down in Hall E and shared a booth with Percussa who had their Audio Cube controllers on display. The Audio Cubes work typically in pairs with optical sensors that interface with the other sensors and connect to a computer via USB. The sensors can be configured to respond to other cubes or to reflections. They had a set of cubes interfaced with Ableton to trigger different clip combinations as well as initiating effects. The control software was a max patch which allows you to translate data as well as control the color of the cubes.

At the back of the booth, there was an interesting filter unit called the Ebbe und Flut from Schippman Music of Germany. The unit sounded very smooth and features a number of input and cv/gate points.

The more I look at the Livewire Modular systems, the more I’m tempted to dive back into the gear lust craze. Ironically while cruising the booth, we met Steve who is a Reason user and works at Livewire building these units

At the Moog Booth, we were treated to a Theremin demonstration from Pamela Kurstin. It’s amazing to hear this instrument played with skilled hands. Ever notice that the great theremin players are all petite women? I think there’s a correlation between body mass and the ability to play this instrument well.

During Pamela’s performance, she dropped in a nasty sounding effect on the theremin which gave it gritty edge. This was a new moogerfooger effect called the MF-107 FreqBox. Input signals modulate the internal vco for some unusual sounding results. Unusual meaning “Very Cool”

One of the showcase displays was at the E-mu booth where they had a vintage E-mu Modular on display. The top unit is from E-mu’s personal collection, but the bottom unit is from a private owner who built a custom MIDI to CV interface. This was being driven from the demo station where they showed the new “Synth Swipe” feature of Emulator X2. This is an automatic sampling system that sends notes out to a MIDI synthesizer and samples the audio coming from the synth. The regions are automatically sliced and mapped. Here’s the real kicker… the regions are automatically looped.

Under glass at the Universal Audio booth were a couple of interesting looking devices. These were protos of a new desktop control system designed to be handy DAW expander devices. One is a mic pre and the other is a control room monitor mixer.

I guess that wraps up my little view of the Winter NAMM Show. I’m off to bed again to get over this cold/flu/fever/uffa thingy.