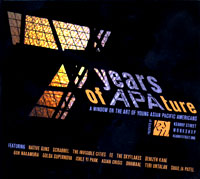 I met up with my friend, Goh Nakamura to give him a hand on a project he’s working on. It would be rather indecorous to reveal any details, but it’s quite an exciting opportunity for him. Goh helped me and John Hinson out with a demo track featured on REDD47.com. Since January when we recorded the tracks, I’ve been messing with the mix and editing the raw tracks into something a bit more polished than the demo track on the Revolution Recording Equipment site.

Goh was asked to submit a track for a compilation CD released by the Kearny Street Workshop, and he selected the version of ‘Surrogate Valentine’ that I produced. He gave me a copy of the CD, and I was surprised to hear that it was copied almost verbatim from the mastered file i delivered. Usually a track is tweaked and equalized to fit with the rest of the album, so i thought it would sound a bit different than the original.

No, i didn’t use Reason’s MClass effects. The rendered mix was imported into logic and processed through my old manley tube compressors which were tracked back digitally into logic pro. With all of the analog gear used to record and master the track, you can hear some noise in the background, but it gives the track a nice character.

2 Responses to “7 years of APAture CD”