Visit with the Propellerhead Programmers 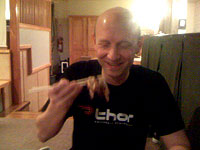 Dan Engelbrecht and Peter Sjöllen were in California last week for some programming workshops on the apple campus. I managed to catch up with them a couple of evenings to hang out and enjoy some nice dinners. The three of us went out to one of my local favorites, Gochi in Cupertino where I had them sample the Kim Chee Pizza. Peter even attempted to eat it with Chopsticks! 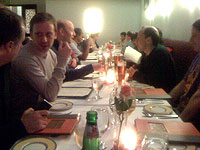 Later on in the week, I organized a big group function with some fellow Reason 4.0 sound designers and beta testers at Amber India - one of the better Indian restaurants in the area. Dan and Peter finally had the opportunity to attach faces and personalities to the names from the Propellerhead user forum. Hopefully they weren’t too annoyed by the constant questions about Reason 4.0 and that pesky broken Leopard library that disables Recycle 2.1.

Afterwards we went to catch up with Rick Silvestri who had a show at a pub in Cupertino. Rick plays bass with the Ry Kihn Band and tried to get the group to learn his new “I AM THOR” song. I’m guessing these serious rockers weren’t into it, so Rick stepped up to the mic in the middle of the set and started doing his best impression of the Reason 4.0 patch.