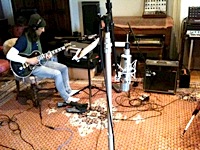 Happy Holidays, everyone! Rick Silvestri (blacktiger) and I decided to do a bit of holiday music last week. We figured we would try to keep up with the old Propellerhead holiday tradition of sharing Reason Christmas songs, but try something with Record and Reason this year. Rick suggested we work on the xmas classic, What Child is This, aka Greensleeves. Actually Rick suggested a few other things first, but I said that we should play it safe and do something that’s in the public domain.

Rick brought his double bass and a few guitars over and we sat down and worked on a rough arrangement. Since i don’t play guitar, this is the first time I had a chance to try out my little Bryce tube amp head which has a great tone for tracking.

Since my limited system only has two (really good) channels of audio input, I used two mics on each take. In most cases, the Wunder CM7 worked out well, but a few tracks, we ended up selecting the SM58 off axis on the cabinet. The upright bass was also off the CM7 and a direct from the pickup. I was really pleased with the not only the bottom end, but the depth and articulation in room came across nicely as well.

Record worked as well as it possibly could! It is so easy to quickly add and edit tracks on the fly. We used the comping feature for a few things, but “one-take” Rick, charged right through. I ended up applying post processing through some of hardware devices by routing a FX send to an audio output, and then re-recording the affected signal. This included reamp-ing tracks through a moog delay line, some outboard tube compression, and an H3000.

If you don’t have Record and Reason, you can listen to the MP3 Stream here:

For Record and Reason users, we are making the Session file available through the holidays. You can download the file here: