By now most avid followers of Propellerhead Reason are probably familiar with the new hardware audio interface, Balance. Balance is an elegant, 2-channel desktop unit that connects to a Mac or PC via USB and features all of the general connections one would expect from a quality device. There are also Reason specific functions, including Clip Safe control and a button to call up an input monitor/tuner display. Once you’ve moved past the looks and features of the unit, the one question that remains is “how does Balance sound?” Well.. to answer this question, a group of us got together in San Francisco at Robotspeak to compare Balance with a few other popular devices in an audio interface shootout.

Interfaces and Set Up

We looked to devices comparable in features and price, and managed to borrow a Digidesign (Avid) Mbox 2, an Apogee Duet, and a MOTU Ultralite. The interfaces were simultaneously connected to an iMac, making it possible to switch between them by driver selection. Audio was routed to a Mackie Mixer which feeds the Robotspeak house system, a pair of large QSC powered speakers.

To minimize noise and to ensure reproduction levels were exactly the same, the output levels were calibrated with a test tone and a multimeter. This is important because the slightest level difference could alter the results. The Duet and Ultralight were the most difficult to match because the monitor level controls are stepped, but once these were matched, it was easy to use the analog controls of Balance and the MBox 2 to calibrate the tone level to a 10th of a millivolt.

Those familiar with Robotspeak know that it’s not an ideal space for conducting critical listening tests. The ceiling is low, there’s street traffic, and music from the neighbors can be heard through the walls. However, most Reason users work in less than ideal conditions and the level of environmental noise feels more realistic, especially with the roaming intoxicated indigents (or roosters) who add a certain charm to the neighborhood.

The audio examples were extracted from compact discs and imported into a Reason 6 song file. The content ranged from Classic Rock, Dance, Dubstep, Electronic, Experimental, Hip-Hop, IDM, Indy, Rock, RnB, Orchestral, Opera, Pop, Progressive, Punk, and a few other genres. For playback of the listening test, all device drivers were set for 44.1 kHz sample rate with 24 bit resolution.

Each round of testing placed Balance against one of the other devices, however the listeners could only identify the interface as either A or B. A 30 second clip was played through A, and then through B, and then again through both; so the listeners could compare their first impressions and finally confirm their preference after the second pass.

Going into the listening test, I hypothesized that people would not be able to tell the difference between Balance and other unit, and the results would average a 50% favorability for Balance and 50% for other interfaces. After tabulating the data, my hypothesis was proven somewhat wrong. The final results indicate that listeners favored Balance by 68.8% compared to the other interfaces. In one test of a female pop vocal piece, every listener preferred the track when heard through Balance (100% favorability). The lowest margin of favorability was 50% where the listeners were split. To my surprise, there were no results where Balance performed with a lower favorability rating than 50%.

The results might be slightly in error since we did not match other interfaces against each other (i.e. Mbox 2 vs Duet), nor did we perform blinds controls like Balance vs. Balance. Also, bear in mind that many of the interfaces are older and considered obsolete, so Balance may have the competitive edge through newer technology and freshly mounted components. Still, we are happy to confirm that Balance performs quite well against legacy devices from very reputable companies. 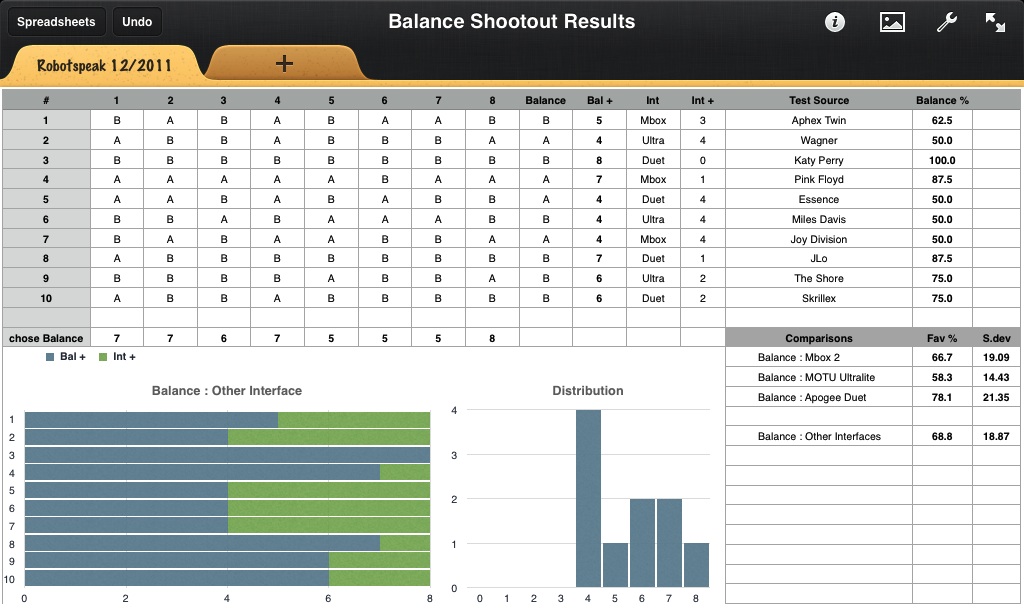 While overall the group preferred Balance, we cannot overlook some of the details in the results where certain characteristics of the other interfaces were subjectively preferred. The high end detail of some examples was favored through the Duet and Ultralight, but at the same time, others felt the high end detail was too harsh and brittle. The listener notes seem fairly consistent about this aspect where people preferred hearing more treble. Some preferred the tone of electric guitars through the MBox 2, stating that the tone was more natural. Low mid and bass heavy examples fared better through Balance where the listeners noticed more definition, but at the same time, others felt that there was too much bass from Balance. Louder examples (primarily electronic/dance music) with smaller dynamic ranges were favored through Balance, which indicates that it’s complementary to typical Reason productions. Examples with considerable dynamic range (jazz/orchestral) were evenly mixed between Balance and the other interfaces. These are important issues to consider because the feedback suggests that listeners have a subjective bias, and that Balance may not be the most suitable interface for the type of music being produced.

SF Musician/Songwriter, Michael Shockey, lent his guitar and vocal talents for the recording tests. I brought along a Wunder CM-7 (large condenser valve mic) to track vocals, and guitar was tracked via D.I. inputs. We were not able to track to all four interfaces simultaneously, but Mike is a consistent and did a great job at repeating his performance as we tracked through each of the four interfaces into Reason.

Despite the inability to conduct blind listening test of recorded material, Mike’s tracks provided a solid template to analyze the differences in tonal quality between the units. I found that the MOTU Ultralight and Apogee Duet distinctly have a bit more sharpness that you find with digital recordings, but Balance captured the coloration of the tube mic better than the other units. While we were only dealing with D.I. on guitar, I preferred the Apogee and Balance more than the MOTU and MBox2.

One person commented that while the sound of Balance is more pleasing, the clinical quality of the apogee might be more useful for mixing. Despite the fact that these results are subjectively biased, we were satisfied in knowing that recording through Balance sounds as good (if not better) than the devices used in this test.

We will probably continue with this experiment, and hopefully test Balance with contemporary devices. In the future, I would focus on the recording aspect and prepare blind listening tests of material recorded through different interfaces. With current units, I expect the results to be much more evenly spread. Even though we cannot conclusively say how Balance will stand up to contemporary devices, anyone looking to upgrade from one of these older firewire interfaces should be confident that going to USB based Balance is not a step down in performance or audio quality.