Day 4 started off fairly slowly. I know I didn’t cover the entire show in detail, but I paced myself and in some ways saved the best for last. It was definitely nice to see the number of analog modular synth systems slowly growing. Despite all of the new software applications and plug-ins, there was definitely a resurgence of hardware. There was plenty to see between Analogue Haven’s and Big City Music’s booths, but I saved the best for last. The last day was quite leisurely, so I took my time to take a closer look at some of the more interesting things.

Propellerhead/Line 6’s Hayden presenting his demo on Reason 3.0. Hayden, wants me to redo Vintage RDK and rename the patches with proper names rather than the numbering mnemonics. This is not the first time i’ve heard this request, so it’s a likely project for the near future.

The new Dave Smith Instruments, monophonic “evolver” keyboard. It’s the little sister of the Polyevolver and can be chained up with rack and pedal versions for multiple voicing.

Magnus and Marcus check out the PolyEvolver.

And the mother of all modulars, the Buchla 200e. Don was at the show doing press stuff, but I spoke with Yasi about the possibility of getting a new chassis and power supply for my old modules.

I sometimes regret not picking up a Thunder controller, but alas, a cool new touch interface is being offered. The 222e Multidimensional Kinesthetic Input Module with a look very similar to the thunder. 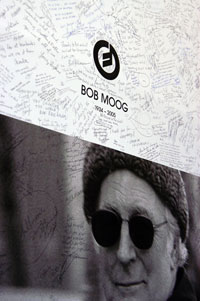 At the moog booth, I had a chance to speak with Craig Anderton, who recently contacted me about a review for PTR-3. He had some very nice things to say, which really made my day. I also met with Brian Kehew, friend of John Hinson. He told me that his new book, Recording the Beatles, is coming out really soon. John Hinson has been lending his technical expertise to the details of the recording gear used at Abbey Road for Brian’s book.

This poster has been up since the show started, and visitors were invited to write a message to Bob. It’s going back to North Carolina, and will hang in the Moog offices. I posted a few detail shots on my flickr page.

Native Instruments Introduced some interesting updates to their software line, including a teaser for their new control surface and software package “KORE”. Details were sketchy, but it sounds like a wrapper system for all native instruments products. Sort of like a modular system for NI software. ‘Sources’ suggested that they plan to package the Komplete software suite included with the KORE control surface, but even this is uncertain.

Chris Petti presenting a demonstration of the basics of using Reason. He was taking requests, so I asked for a sequence of 64th notes at 180 bpm.

Producer and DJ, Arabian Prince of NWA and other affiliations, demonstrated using Reason for Hip-Hop production. The hugeness of his sound was really impressive.

AP’s Crazy desktop pattern… It’s like having a Reason Seizure.

One of the most amazing announcements was “Tronical”, a non-destructive automatic tuning system for electric guitars. Synthax Audio AG from Germany have patented a unique system of tuning electronics and servo controlled Tuner pegs. Preset tunings (open strings, intonation) can be stored and recalled in a manner of seconds. It was pretty amazing to see the tuning pegs twist the strat into tune.

Richard Devine is indeed the NI master. Towards the end of the show he put on an amazing set using Tracktor with a glitchy remix of “Feel for You” by Chaka Kahn. After the show ended we had a chance to chat about crazy synth stuff and sound design. He’s truly a workaholic and is so involved with a variety of different projects.

End of the Show Toast back at the Prop’s booth. Pictured: The Bitplant crew, Tage, Michael, and booth designer, Fredrik.

Ulrika and Johan, polishing off the last of the sparkling wine.

Tage working out the breakdown and load out logistics. “You guys work, and I’ll watch”

The crew loading up the shipping crates, for the long trip back to Stockholm.

Fortunately, the Props came in large numbers this year, and I didn’t have to lend a hand dismantling the booth like last year. Rather than wait for the crew, the Merkles, Magnus, and I planned to head off to dinner with a couple of people from FXpansion. In the end, FXpansion brought their entire staff so the evening went from a small intimate dinner with friends, to a big dinner party.