Saturday night wasn’t too crazy, but i’m feeling the effects of old age combined with loud music, disrespectful punks, and junk food. Even with the triple shot espresso beverage my brain isn’t quite working yet, so this entry is going to rely more on the pictures rather than the words. I took a lot of photos…of gear :-p anyways, this was started sunday morning, but i’m finishing up today.

Another vintage analog synthesizer plug-in from Arturia is something quite exciting. It’s a combined Sequential Circuits Prophet 5 and Prophet VS synth. Most people are probably familiar with the 5, but the VS is a wavetable synth with analog filters with vector control - meaning there are four oscillators which are balanced using a joystick control. You can access one or the other, or create hybrid patches. I’m looking forward to seeing this one when it’s released.

MOTU introduced an interesting new virtual instrument plug-in called “Ethno” which contains a virtual cornucopia of world instruments. I didn’t have a close look, but it had some very cool exotic sounds for those who want to add that exotic spice to their productions. You never know when you need a bazouki riff on that epic trance remix.

While cruising through the guitar section, I stumbled across a little theremin device from Hiwatt. I found the interface interesting as it uses a dome antenna rather than an arial. There’s only one conductor which controls the pitch, and when you move your hand away the sound diminishes. It has an interesting twist however: They’ve added a little delay circuit to create reverberant vintage sci-fi effects.

I’ve seen the Roland V-Synth XT before, and this piece really caught my attention because it uses the Variphrase Technology. Besides the analysis and resynthesis features, it has all of the bells and whistles including the D-50 soundset. This unit has a cool hybrid look with a futuristic touch panel interface embedded into a hefty vintage looking chasis with knob and button controls.

Another interesting unit from Roland is the SH-201 with a look reminicent of the old SH-Synths, the TB-303, and the old Junos, and yes, it has an arpeggiator. The heart of the unit is an analog modelling synth complete with 303ish knobs and SHish sliders and bank and patch select buttons that control all of the synthesis parameters. The layout is basically the same as a typical vintage Roland synth, but there’s more. You can route external audio through the filters. The SH-201 is also a MIDI control surface as well as a MIDI interface that connects via USB to your computer. The USB connection also provides audio routing to and from your computer. Yes, the keyboard itself also acts as an audio interface with inputs and outputs. There’s also a plug-in which controls all of the synth parameters and drives a second instance of the synth engine. In other words, the synth engine allows you to have one patch live on the keyboard and second patch running from the sequencer. The $700 price tag seems more than fair considering you get a keyboard controller, an audio interface, a MIDI interface, and a synth all in one package.

Forat Music based in Los Angeles, also had a few customized Roland pieces showcased in the Roland pavillion. Pictured is the tricked out MV-8000 in fire-engine red. They also customized an MC-909 with a black powder coat finish and added a vintage touch with oak side panels. A perfect match for your old Oberheim units! 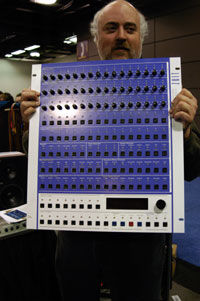 Analogue Haven’s display down in the “Dungeon” of the convention center always attracts a lot of attention from synthesis fanatics. This year, they had an abundance of step sequencers on display which i found quite interesting. Pictured is the the Infection Music Zeit Sequencer. A monster system with interesting features like LFO that can modulate values for each step.

The Manikin Electronics Schrittmacher is a MIDI/CV step sequencer with a digital programming interface.

Also from Manikin is the “Memotron”, a digital version of the mellotron…when you really don’t want to deal with tape racks and still want to look cool. 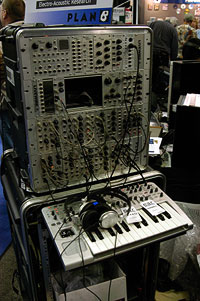 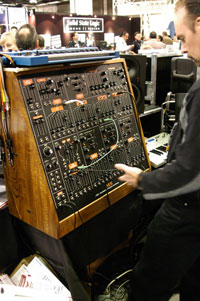 The Macbeth M5 looks like an Arp on Steroids.

Sequentix P3 Step Sequencer has step buttons that remind one of the 909, and even has programming features for 909 like swing and shuffle.

Out of all of the modular systems, the one that really caught my eye was the Modcan Modular synthesizer.

The modcan step sequencer has slider controls like the old arp step sequencer. A simple difference from the standard type of knob interface, but this feature makes it very easy to visualize the sequence and CV levels.

This is one of those devices that people constantly think about, especially for those who use several pedal effects in the signal chain for tweaky processing of whatever. Mpathx displayed the “Smart Rack” a power distribution system that provides both AC and DC voltages for a variety of applications. For studios and musicians the system can replace those pesky wall warts that not only clutter up a power strip, but can induce pesky EM. The voltage settings are set using software that sends the information via a USB connection.

I’m not sure if i caught the Musicpole at previous shows, but this is a cool little MIDI controller that uses touch sensitive contacts intuitively placed around a shaft. The placement is based on the circle of 5ths, and provides an interesting way to visualize intervals.

Opensys, makers of the Eko introduced his little sister, the Niko. Niko has a 3 octave keyboard with two customizable expansion panels and the cool touch screen interface.

The booth next to opensys featured a unique looking instrument called the Keytar, a stringed instrument with a metal body and a funky keyboard mechanism fastened to the chasis. you simply hold down a chord and strum. It was a little odd looking, but you have to give the guy kudos for trying to come up with something unique.

Walking by the Sony booth, i saw an interesting little recording system. The PCM-D1 is A portable digital audio recorder with coincident XY mics. It records 24bit audio @ 96kHz and looks extremely expensive - about $2k.

At the end of the day, GW Childs, one of the Reason 3.0 sound designers, presented a demonstration of sound design techniques he used on various video games using Propellerheads Reason. For those who know, GW works for a famous company owned by a guy named George, who makes films about Jedi.

I don’t know why, but the Swedes really enjoy going to Red Robin. It’s become a tradition to make the trek down Harbor Blvd. to enjoy a greasy burger and bottomless fries. The weather has been rather cold this week, and the crew, despite being acclimatized to cold weather, were all freezing in the Southern California.

After a long day on our feet, and taking the 1.5 km trek, Ulrika, Marcus, Magnus, & Patrik sit in the waiting area.

An unusual shot of Marcus with his eyes open. He claims that he always closes his eyes when someone takes a photo of him. After several attempts i finally managed to catch him off guard.